Ai Mediq is publishing a translation of publication by Prof. Oleg S. Glazachev for RBC.RU regarding the implications of COVID-19 and therapeutic potential of application of ReOxy device to rehabilitate the patients.

What are the health consequences of the virus, and what can be done to recover from a serious illness?

Coronavirus infection can have consequences for a person, even if he had an infection in a mild form. The infection leads to a malfunction of the internal systems of the body. First of all, the functions of the lungs are disrupted, or rather, their ability to take oxygen from the air and transfer it further to all organs. Besides, damage to the nervous and cardiovascular systems often occurs. After being discharged from the hospital, patients experience severe weakness and shortness of breath even with minimal physical exertion. The chief rehabilitation therapist of Russia, professor Galina Ivanova stated [1] that “rehabilitation is needed for all patients, regardless of the presence and severity of their impaired functions. But it will be especially needed by patients who have had an infection in moderate and severe forms. ” One of the technologies for recovering patients after COVID-19, which is used today all over the world, is breathing therapy using controlled short-term hypoxic exposures. Few know that lowering oxygen levels can be beneficial for the body. It increases resistance to oxygen deficiency and improves exercise tolerance. The main thing here is a moderate dosage.  Oleg Glazachev talks about how the technology works. The term “hypoxia” is widely used in practical medicine as an indication of a decrease in the oxygen content in the blood, individual organs and tissues of the body. This condition can occur for various reasons – with a lack of oxygen (for example, in the mountains), due to problems with the lungs, circulatory disorders, or due to low content of red blood cells and haemoglobin in the blood. Recently, the term “hypoxia” has been increasingly mentioned in connection with the coronavirus. COVID-19 is characterized by an impressive heterogeneity of symptoms, and this is its main danger. Patients with severe hypoxemia (a low level of oxygen in the blood, determined with the help of special devices – pulse oximeters) can have both severe shortness of breath and calm breathing. The latter just confuses doctors, which even gave rise to the term “happy hypoxemia”. Among all Wuhan patients infected with SARS-COV-2, only 19% complained of shortness of breath. 62% of patients with a severe course of the disease and 46% of those who were later transferred to mechanical ventilation due to severe respiratory failure did not have shortness of breath [2].

The blood supply to cells, metabolism and the amount of energy depends on the level of oxygen in the body. When it becomes insufficient, our body has to adapt – to include saving compensatory mechanisms. For this, cells in tissues and organs must first “feel” that they lack oxygen, and how exactly this happens, scientists could not understand for decades. But in 2019, Americans Gregg Semenza, William Kelin and Englishman Peter Ratcliffe received the Nobel Prize for their discovery of the molecular mechanisms of cell adaptation to hypoxia.

One of the most effective methods of dealing with the consequences of the coronavirus and preventing the development of serious complications is to stay in the mountains. Christian Arias-Reyes from the Faculty of Medicine at Laval University in Quebec (Canada) suggested that increased levels of UV radiation at high altitude could reduce the survival of COVID-19 viral particles, and physiological altitude adaptation could protect the body from viral infections and the development of the disease. However, according to Dr Johannes Burtscher from Switzerland, the low incidence in high mountain areas may be associated with natural social distancing [3]. As for Russia, unfortunately, most of our fellow citizens do not have the opportunity to go to the mountains and spend a period of isolation there. This period of “forced downtime” of the body and the lack of sufficient sunlight led to a decrease in physical status and immunity in general, as well as to a deterioration in the psychological state. 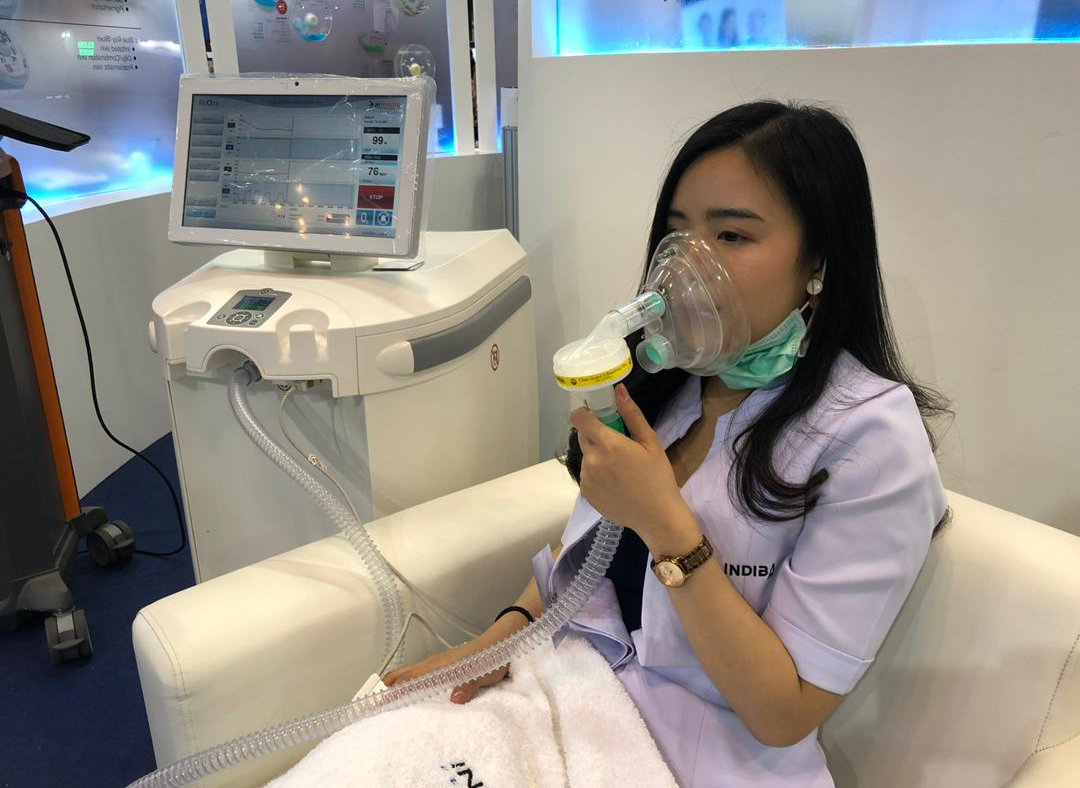 The special mountain climate is not the only method of rehabilitation after COVID-19. One of the latest technologies for recovery using hypoxia is ReOxy-therapy, which consists in breathing through a mask at short intervals (up to 6-7 minutes) hypoxic air alternating with oxygen-enriched air. The meaning of this therapy is to return to a normal oxygen supply, and this is one of the priority tasks in the rehabilitation of patients with cardiovascular pathology and patients after COVID-19. Blood oxygen saturation and other vital parameters are measured using sensors throughout the entire procedure. If the oxygen level in the tissues falls below certain individual values, the oxygen content in the inhaled air and its volume will automatically increase. The therapy has no analogues in its characteristics [4]. 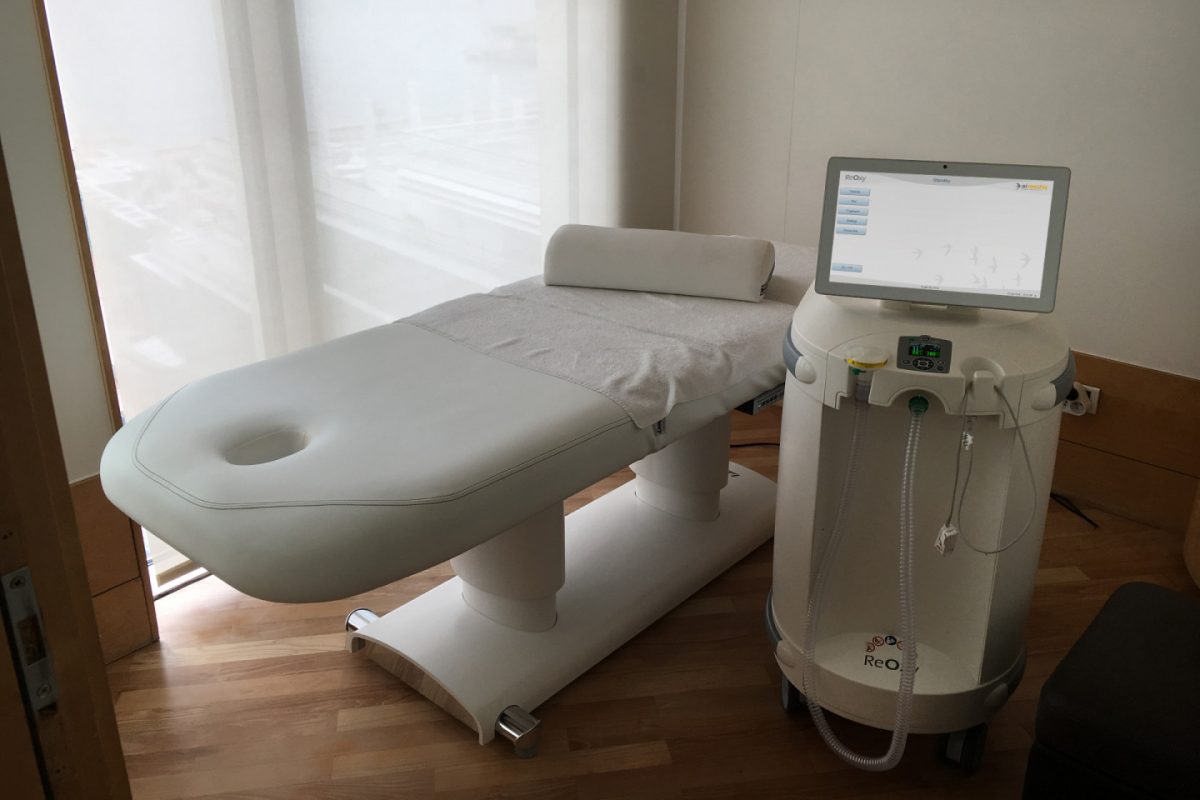 The procedure can be presented more clearly as follows: the patient “rises” to a certain height in a matter of minutes and also quickly “returns” to the plain. Moreover, the height of ascent and the duration of being “in the mountains” are selected strictly individually, taking into account the body’s response to hypoxia. During the training session, the “ascent” and “descent” are repeated many times. Even though the device “independently” calculates an effective and safe therapeutic dose of hypoxia, ReOxy-therapy as a method of medical rehabilitation should be prescribed and performed under the supervision of a physician. At the same time, healthy persons or patients who have already undergone procedures under the supervision of a doctor can use this device at home. The first information about the possibility of using this method in the rehabilitation of patients after COVID-19 was received from Professor Roberto Pedretti from IRCCS Multimedica (Italy) in May. In an interview with the Daily Mail on June 2, it was mentioned that “the professor has begun testing a potentially new rehabilitative treatment for COVID-19 patients who are unable to exercise enough to restore lung capacity. The study will use ReOxy devices, which provide individually dosed interval hypoxic-hyperoxic therapy”[4]. 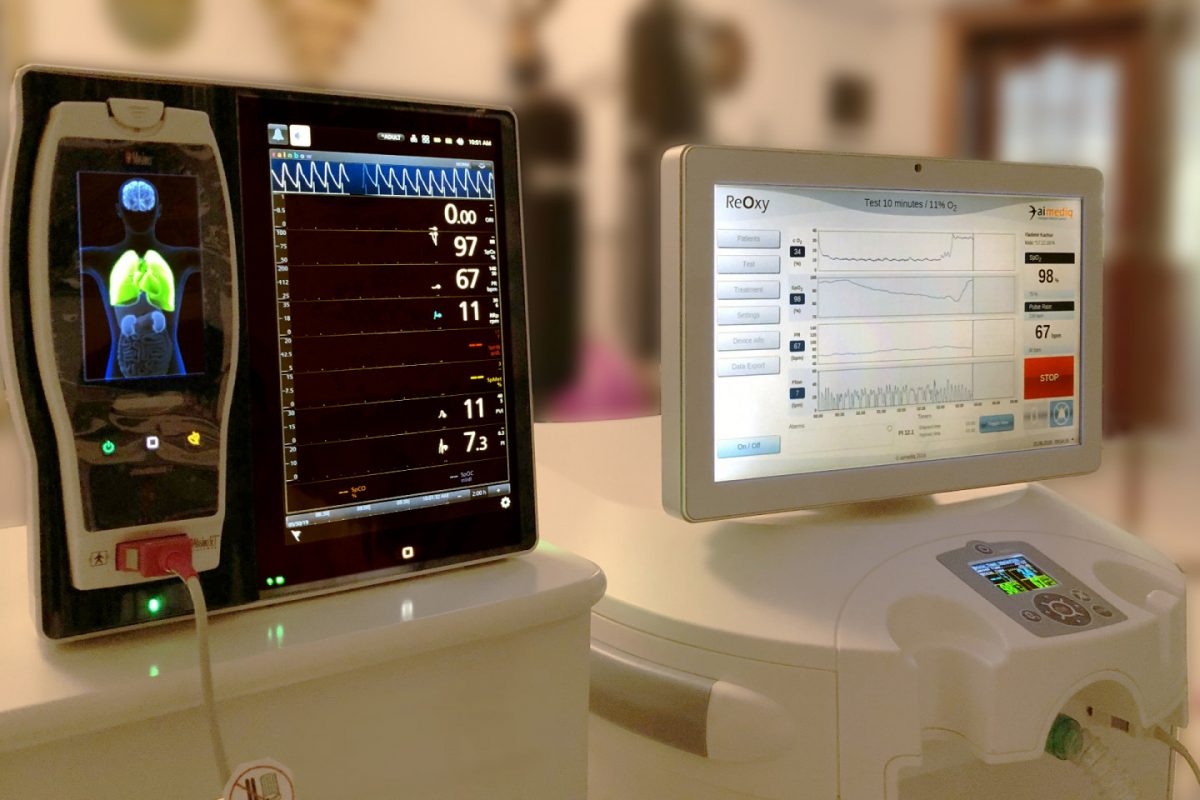 Where and how is ReOxy technology used?

In Europe, the device is registered as a Cardiorespiratory medical device, and thanks to this, the method is used in Germany, Italy, Switzerland, it is also used Southeast Asian countries. Since the beginning of summer, the method has become available in Russia. Simon Matskeplishvili, Deputy Director for Research, Medical Research and Education Center, Moscow State University M.V. Lomonosov, Corresponding Member of the Russian Academy of Sciences, Doctor of Medical Sciences, says: “In the Medical Center of the Moscow State University. M.V. Lomonosov, during the outbreak of COVID-19, its own protocol for treating coronavirus infection was developed, which made it possible to save many patients and which is now being actively used in other countries. We are currently implementing a comprehensive rehabilitation program for patients who have undergone COVID-19, which includes the most effective and safe methods – hypoxic therapy, inhalation of helium-oxygen mixture and others”.

RBC  is one of the largest Russian media groups. The company holds an informational agency RosBusinessConsulting, including a news web-portal, business newspaper RBC Daily, monthly business magazine RBC, and RBCTV.

Original of Publication in Russian
[2] Is 'happy hypoxia' in COVID-19 a disorder of autonomic interoception? A hypothesis
[3] Caution is needed on the effect of altitude on the pathogenesis of SAR-CoV-2 virus
[4] Publication in Russian. Гипоксические тренировки в кардиореабилитации: коррекция метаболических и кардиоваскулярных факторов риска