Intermittent Hypoxic Treatment – What is it? 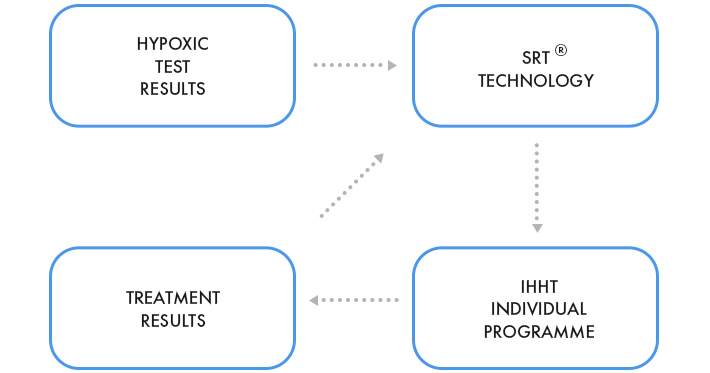 The main idea of the interval hypoxic treatment method is repeated reduction of blood oxygen to the individual hypoxia adaptation level intermingled with recovery intervals.

Blood oxygen reduction and tissues hypoxia can be reached by breathing oxygen-reduced air (normobaric hypoxia). The temporary exposure to hypoxia, interspersed with periods of normoxia or hyperoxia, is a special hypoxic protocol called the intermittent hypoxia (IH) in the former, or intermittent hypoxia-hyperoxia (IHH) in the latter case.

When intermittent hypoxia can be useful

How to choose the optimal hypoxic exposure required to obtain therapeutic effects. The efficacy of IH is dependent upon five key variables (Törpel et al.2019):

Only the controlled and dosed exposure to normobaric hypoxia may be used as a therapeutic method.

Alexander Törpel et al. (European Journal of Applied Physiology, 2019):
“While the external intensity of hypoxia determines the type of the environmental condition (e.g., the fraction of inspired oxygen: FiO2), the internal intensity of hypoxia is characterized by the amount of oxygen deficit in the organism (e.g., the oxygen saturation of the blood: SpO2, measured by a pulse oximeter). Here, the intensity of internal hypoxia depends among others on the intensity of external hypoxia, some physiological processes (e.g., lung diffusion capacity), the chemoreceptor sensitivity (García-Río et al. 2007) and the compensatory response of the organism (e.g., the cardiorespiratory system; Bärtsch and Gibbs 2007). With regard to the latter three factors, inter-individual differences and age-specific changes can be determined (García-Río et al. 2007; Lhuissier et al. 2012; Stam et al. 1994). Consequently, there are inter-individual differences of the internal intensity of hypoxia during the administration of an external hypoxia which may result in a different severity of the hypoxic stimulus for the organism (variations by up to 10% or more of the SpO2, see Chacaroun et al. 2017; Burtscher et al. 2004; Harshman et al. 2015).

During the initial pretreatment test, the patient inhales air with low oxygen content at atmospheric pressure in a continuous mode through a mask. In the interval therapeutic mode that follows, periods of hypoxia (10-14% O2) are interrupted by periods of reoxygenation by normoxia (21% O2) and/or hyperoxia (up to 35% O2).

Interval Hypoxic Hyperoxic Treatment (IHHT) parameters are determined after the preliminary assessment of patient’s ability to adapt to hypoxic gas mixtures, by doing the hypoxic test.

At the end of each test, procedure, and treatment course ReOxy generates a summary report in pdf.

During the re-oxygenation phase, induction of mild oxidative stress takes place within the cell, leading to initiation of adaptive reactions cascade. The end result is both hypoxia and hyperoxia-induced activation of numerous transcription factors (NF-kB, АР-1, HIF-1-alpha, HIF-3-alpha) which induce protective proteins, such as antioxidative enzymes, HSP, FeRP, growth factors, and repair enzymes. Therefore, the cells become saturated with protective molecules. Induction of reactive oxygen species (ROS) synthesis depends on the degree of hypoxia achieved. At the same time, the use of breathing mixtures with oxygen concentrations below 10% is very likely to produce adverse effects even if applied for a very short period of time.

The replacement of normoxia periods by their hyperoxic (from 30% to 40% O2) counterparts significantly increases the treatment factor amplitude resulting in a stronger ROS signal without the need to utilise more intense and risky hypoxia. 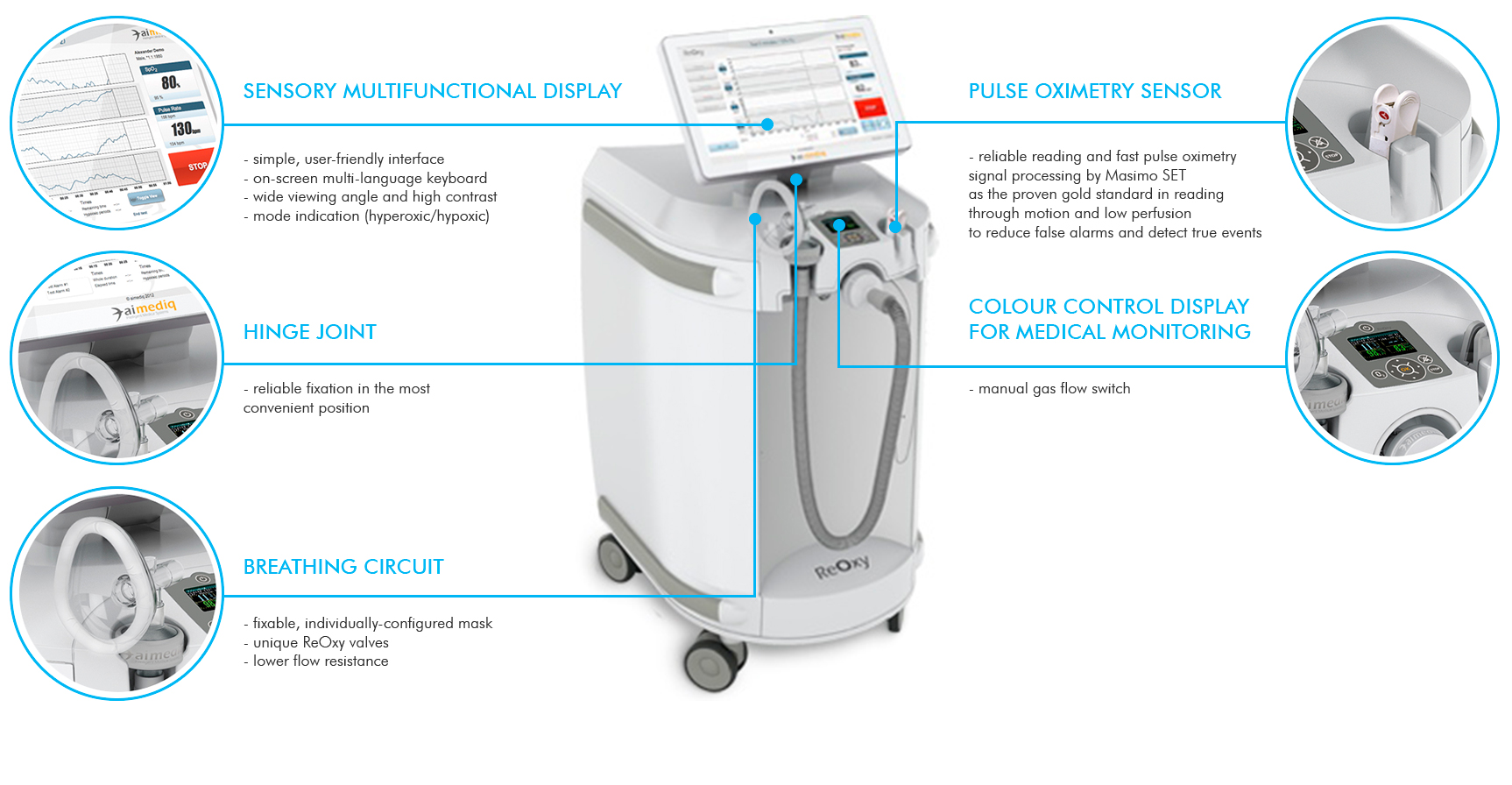